On Wednesday, a week since parts of our community were devastated by Hurricane Ian, we visited a grassroots effort to help the residents of Myakka City. A distribution site is setup at the Myakka City Community Center, just down the road from Myakka City Elementary.

Principal Carol Ricks (pictured below in center) served in a shelter during the storm, not knowing if her own home was safe from the high winds of Ian. She's grateful that her Myakka City property only had minor damage, but that's not the story for some of her school staff. The roof caved in at one employee's home due to a downed tree. Another lost everything and didn't have insurance to cover the losses. 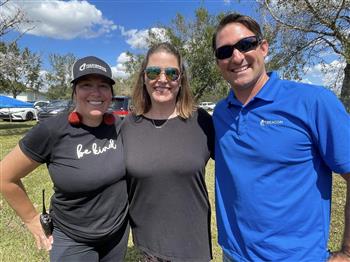 Mrs. Ricks jumped into action and coordinated a community donation drive with the president of Myakka City Elementary's PTO (Parent Teacher Organization), Kelly Strausbaugh. They contacted other school principals and organizations who could team up to provide resources. Days later, a week-long distribution drive was underway.

The Department of Health-Manatee is providing water sample testing for Myakka residents. First responders from East Manatee Fire Rescue loaded cases of water and bales of hay onto the beds of pickup trucks. The Salvation Army served bagged lunches as a Feeding Tampa Bay box truck dropped off a load of non-perishable food. Manatee County Government partnered on the project, too.

Residents say they are bruised, but not broken. Receiving help from their Manatee County neighbors has made all the difference in their lives.